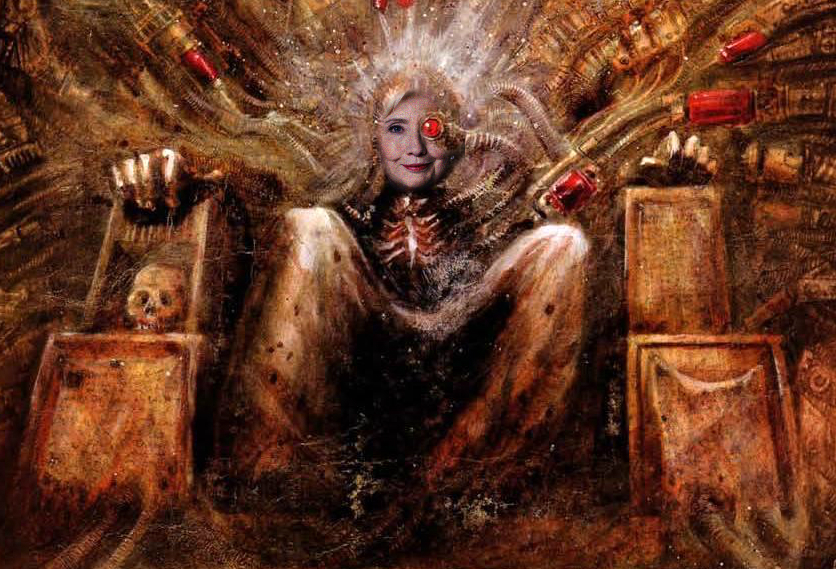 “BABY,” screamed Trump, strapping on his space-age leg, “give me the good news”. Dr. Henrik Plaque looked unwaveringly at the presidential candidate in silence for three full seconds before, cowed by the unremitting, childlike moon-eyes that Trump used so well against Fox News anchors and pinko jellybones anarchist hatefucks alike, he cast his eyes down to the fool’s gold carpet and spoke. “Professor Trump,” he muttered, using the honorific his employer preferred in private, “you’ve lost another finger. The lupus is aggressive, and I don’t know how much longer we can keep giving you bionic parts before someone notices you won’t go within a square mile of a school science lab magnet.”

Four hundred or so miles away, in Gartbesque, Indiana, Hillary Rodham Clinton was screaming as her newest jaw was drilled into her decayed skull. Dr. Jeselnik Hunger looked with pleading eyes at the nearest speech writer, who pretended not to notice either the pitiful gaze, nor the pitiful wails [there is some confusions as to whether this in fact refers to “gays” and “whales”. WHEY-OH]. Minutes passed before Clinton’s breathing slowed enough for her to begin speaking. She pushed a button on what looked like an antique TV remote – faux-mahogany and matte plastic – and her arms crossed themselves with a prehistoric metal screech. “How long do we have?” With visible pain at the mere muscle movement, she looked to the corner of the room, where what seemed to be a near-perfect body double of the Democrat stalwart stood. Dr. Hunger cleared his throat. “I honestly don’t know”.

Trump vomited out a green paste while thirty staff members applauded, just to make him feel better. He’d eaten only carrots for twenty days now – why was it green? No one asked. Trump looked wildly around, then punched himself in the temple for betraying his own mortal worries, asked for a towel for his now profusely-bleeding head, and spoke: “look, I can’t even wear a hat without my guts falling out my ass, my children keep blowing up, and someone is sending me personalised gravestones in the mail, but we have to stay as a unit. I know you’ve all seen my stumps, and the things that looks like hands but definitely aren’t hands growing out of my back, but the public just can’t know that their future leader is roughly the consistency of yoghurt, and could be punched in half by a fan blowing the wrong way. You guys, we’re family, and people need to know that daddy’s strong.”

Clinton had an aide pull her calcified, elongated neck closer to the homunculus that shared her form. If its legs weren’t backwards and a foot too short, and if it had been sat in a silver tub full of tubes and nutrients, even she’d be convinced that it was a reflection, not a person. “It’s not a person”, she chided herself inwardly, “never let yourself think that that is a person.” Kiki, for that was the faulty clone’s given name, moaned for its dog. A handler shuffled over to say that Kiki had already eaten for the fortnight, and that she knew that. Clinton looked balefully at the creature. “This had better work”, she said to no one in particular, and dunked her head in the milky solution that kept her alive, before blowing bubbles for fun.

The Bilderberg Group met that night. The world’s most influential nefariates travelled to a castle in Basque Spain by Moon-Tubes, arriving in a nude heap (Moon-Tubes do not accommodate clothes) in a layer of moist construction foam filling a swimming pool envisaged but never seen by Picasso. Climbing out of the pool and putting on matching deerskin gowns, they all talked, one-to-one, tens of pockmarked men pairing off for private discussions. And yet the topic remained consistent throughout the group. Today was the day. The health reports.

Maria looked up from the chrome sink when a trucker she’d never seen before screamed at her to turn the TV up. She scowled, but acquiesced, leaving effervescent industrial soap on the Volume+ button. Onstage – bodies rendered in liquid crystal to millions across the world – Donald Trump and Hillary Clinton were introduced, and strode onto the dais, each matching the other’s stride for fear of being seen to have body language interpreted as too unusual by commentators and plebeians.

Trump waved enthusiastically to the crowd, before withdrawing his hand suddenly, and frowning. If anyone had had the chance to notice, they would have seen the sudden bulge at his suit jacket’s shoulder, as if an explosion had gone off under the 30% polyester hem. It had. Clinton, for her part, looked entirely impassive, presenting an unimpressed aspect to viewers, except as she appeared to catch sight of a child wearing a shirt with a hamburger on it and veered wildly off course, before jolting upright as if electrocuted, and proceeding to her position behind the assigned lectern.

Guest Moderator Brock Lesnar spoke from his chair: “ladies and gentlemen in this restaurant we call America, we come here tonight to eat words, drink facts and collect the bill. A bill of good health, that is!” Maria, still washing dishes in her Midwest diner, smiled at the great wordplay. “Our possible incumbents have arrived here to show us that they are not only fit to serve office, they are fit to serve coffees. They won’t just run the country, they’ll run a triathlon, ignoring the swimming and cycling portions because that’s half-assing a good job – they’ll just run the whole way. They won’t just serve the electorate, they’ll surf to Connecticut, which is hard because the Pawcatuk river is notoriously calm. Let’s learn about these guys’ bodies!”

A cheer went up, both on TV and in the diner. Maria gulped, and dunked a glass, turning it so that that little air bubble that forms in downturned glasses underwater would sound like it was doing a little fart and be more easy to manoeuvre.

At Lesnar’s invitation, Trump cleared his throat to speak. Immediately the crowd knew something was wrong, because his body somehow ended up at a 45 degree angle with the strain of the movement, and did not right itself. Panicked but improvising, Trump shuffled two feet to the right to reach the microphone with his bent head. “My health is impeccable, he said – let me show you.” A projector screen unfurled from the ceiling, dropped by two dozen interns, and medical documents filled the hundred-foot white rectangle. “MORE THAN HUMAN” screamed words written in red ink. “COULD GROW A WOMB IN A PINCH”, “FIGHTS LIKE A FUCKING GLADIATOR”, “EATS A KITCHEN WORTH OF MEAT A DAY”.

While impressive, the words rang false, because Trump collapsed sideways like a dead tree, and his entire side burst open, letting loose several hundred graveworms that had nested in his flank. Kiki – for it was Clinton’s abortive clone onstage – finally lost her mind at the sight, screaming in non-English and ripping through the curtains behind the dais. That revealed the true Clinton, her floating milk bath secreted behind the velvet where Bluetooth signals would allow her to transfer thoughts to the fell beast that shared her form.

Taking the initiative, the withered Clinton piloted her vehicle-cum-hospital to the nearest microphone, shouting over Trump’s keening yelps. “I apologise for lying to you, America, but let this be my truth. I live like this, and I love you. She pushed a button, and fireworks shot out of the exhaust modules of her craft, igniting the recently waxed wooden floor of the dais, and immediately boiling her nutrient bath. As she yelled for mercy, her writhing led to the striking of a button, which projected her own health report onto the ceiling of the auditorium. Two words, in oversized print:  “GOOD STUFF”. Doctors Plaque and Hunger ran to each other from either side of the stage, at first seeming to want to help their patients, before giving into temptation, turning to one another and kissing furiously, madly in front of the nation, knowing that only the other man could understand.

Maria switched off the TV, pulled out a pistol, and shot all 9 patrons of her diner. She pulled off the wig, and detached her long nose. Geraldine, a passer-by, looked through the window to see what could only be described as a cackling Martin Luther King Jr. in a yellow dress, before a bullet passed through her brain. Martin blew the smoke from the gun barrel, holstered it in a garter belt, and said: “election day, baby”.