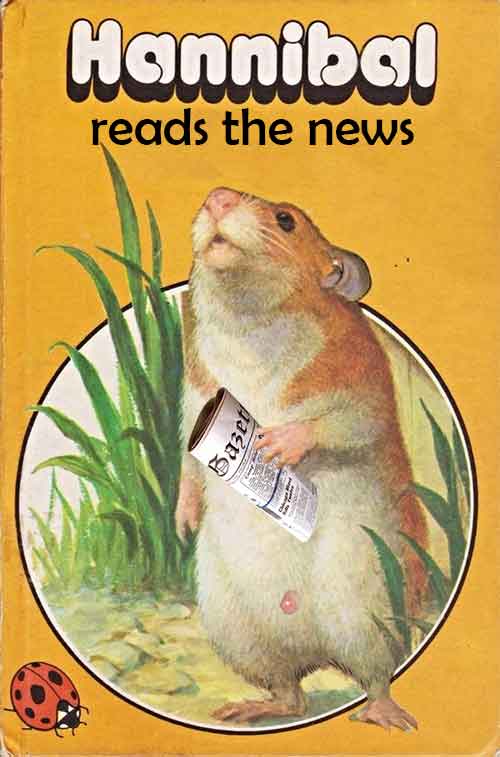 It was just another Monday for Hannibal. He woke up in his warren, which is where Hamsters live. Earthworms churned throught the soil above him, singing as they left the earth more fertile, by eating it and shitting it. Hannibal liked listening to the Earthworms sing, even if no-one told him he was amazing for eating and shitting. Before he had time to dwell on this, Postman Crow poked his head into the warren, a wad of newspapers stuffed into his beak.

“Read all about it”, screamed Postman Crow, before pulling his head out and hopping onto his postman’s bicycle. He flapped his wings, fell off the bicycle, and decided to push it along with his wings. “Why aren’t you flying today, Postman Crow?” asked Hannibal. “Health and safety, mate. Fucking ridiculous. Pecked some cunt’s eye out divebombing with an Amazon parcel, so they put me on this.”

“Oh dear,” said Hannibal. “The world appears to be going to hell in a handbag. Still, at least now I can have a cup of Hamster coffee and read the news.”

But the news was all about Danny Fart, a very rich Guinea Pig who Hannibal quietly suspected was an analogue for the human, Donald Trump. The Guinea Pig Danny Farts had been doing lots of very analogous things, like threatening to build a fence around a pond to stop the freeloading ducks from getting bread. He’d also gone to a zoo, and told an endangered panda it was no wonder other pandas didn’t want to fuck her, because she was a fat pig. He’d also said that he hated kittiwakes, lobsters and chameleons, but there wasn’t enough context to work out what those were analogies for.

There was nothing for it. Hannibal’s tiny front paws stretched forward, rummaging around in the fur close to his groin. His back legs pedalled in the air, finding no purchase against the damp warren air. Hannibal rocked backwards and forwards for ten minutes, unable to reach either his dick or asshole. “Well, it looks like I’m on a hiding to nothing”, moaned Hannibal, which is the saddest thing you can say whilst having a wank. But just as he was about to give up, and more by luck than judgment, all four of his paws hit his little hamster dick at the same time, causing a fraction of a millilitre of spunk to squirt onto the soil.

“Thanks, Hannibal,” sang an Earthworm, popping up to devour the spunk, then shitting it back into the soil six inches away, which immediately became mossy and fertile. A mole poked his head into the warren. “Oh wow. This earthworm shit with a bit of hamster spunk on it will make a lovely present for my wife.”

Hannibal saw that his hamster wank was doing some good, and felt content that despite the terrible state of the  national news, he was playing a positive role in his local community. “Perhaps that is the moral of the story!” he mused.

Hannibal turned on the television. But there were more bad analogies there, this time about Brexit. He turned up the volume.

“There’s this giraffe right, and he thinks he’s fucking ace, but all the other giraffes in the herd think he’s a total prick. They always have, but he’s so fucking noisy it’s easier to let him chat shit then laugh about him behind his back. But the fact he’s an asshole, and always has been really, never seems to sink in with this giraffe. He really fucking thinks he’s summat. So anyway, he’s basically such a colossally deluded and hateful prick that he’s decided to sever ties with other giraffes, because seriously, he’s a fucking hopeless piece of shit.”

“Fuck all of those guys. I don’t need them,” said the Giraffe on the TV. “I am the best giraffe in the world. Look at my long legs. My nice long legs. Get under my legs. This is a fun game I like to play. I’m going to move left and right. Try to stay under my body and I will shelter you from this meteor shower. Unlike other giraffes, I am meteor-proof.”

Hannibal felt his miniature balls refilling, and decided to leave the warren. There was an owl waiting for him. “I’m an owl,” said the owl, in a way that suggested he wasn’t joking.

“I bet you two Animal Pounds you can’t get it in my mouth,” smiled the owl.

“You’re on like Everybody Gonfi Gon with Simon Le Bon’s MOM!” laughed Hannibal, who fell onto his back and started the long, frustrating process of trying to hit his dick with all four paws at once. But this time, a friendly voice popped up.

“Oh, would you mind?” gasped Hannibal.

The owl smiled mischievously, her cloaca producing a weak hiss-trickle of foam like an empty can of shaving cream “Oh, I see. You’re getting help? In that case, I’m going to make you earn my two Animal Pounds.”

The owl started rotating her head around and around, like a clown’s face. “Steady as she comes, Hannibal!” laughed the wolf, as he pounded his big paws down on the hamster’s tiny taint, causing a miniscule amount of hamster spunk to arc towards the owl’s mouth.

A crowd of frogs gasped in delight as the inadequate spunk packet hit the owl on the cheek, where some moss began to grow. She smiled with wise indulgence. “Close! But you should aim where the mouth’s going to be, not where it is!”

“Truly you are a wise owl,” said Hannibal, suddenly dejected. “But I only have one Animal Pound, and cannot pay you the bet. I have totally fucked it up.”

Then, to Hannibal’s great surprise, her big owl tongue slurped out of her mouth and licked it all off like a wise Scooby Doo owl.

“Well, I guess it’s in my mouth now! Here’s your two Animal Pounds”

“That is very generous,” gasped Hannibal. “You could easily have not licked my spunk off your cheek and sent me to Hamster debtors prison.”

“What can I say?” smiled the owl. “I’m just really into spunk, I guess. Oh, and co-operation and working together is cool. That is perhaps the moral of the story.”

Happy that he had learned a lesson from from getting a small amount of wank onto an owl, Hannibal decided to go deeper into the forest.

Deep in the forest, in a low mossy bowl, he met the first tree that ever grew in the world.

“Is this an analogy?” asked Hannibal. “I’ve been dealing largely in analogy today. Analogy and reading the news.”

“I’ve got some fuckin’ news for you, mate, I’m fucked. Everything’s fucked. How do you do an analogy for that? What do you get to represent everything?”

“Well, that’s just the icing on the bollock-shaped cake. You never think it’s you, do you? It’s always something, someone else that’s an analogy. The whole world is fucked, and everyone’s going to look at me, and say ‘check out that prick, indirectly representing our suffering’. Well, I’m not having it. I’m just going to die right now. Fuck you lot.”

Hannibal had never been so turned on. He felt his ball-bearing nuts chugging away like atoms in a tiny Hadron Collider. And without further ado, he rolled onto his back and began the almost futile process of trying to reach his hamster dick with his four inadequate legs.

After half an hour, an exhausted Hannibal finally accepted that it wasn’t going to work. It looked like the dead tree was just going to have to go without a tiny amount of spunk on it. But just as he rocked to a standstill, and let his spine relax, he realised once again that he wasn’t alone.

“Stick at it, buddy”, hooted the Owl, gobbing out the spunk she had kept in her mouth onto a branch, which immediately sprouted some moss.

“Hey boys,” said the mole’s wife, as she proudly queefed out the lump of Hamster spunk-sodden Earthworm shit soil onto the floor.

“Hey fella,” sang the Earthworms, who’d travelled far and wide, carrying wads of spunky soil six inches at a time to help their friend wank on a dead tree.

“Dudes! Wait for us!” cheered the frogs, their legs matted with glutinous spawn. It wasn’t spunk, but everyone appreciated the gesture – and some moss grew anyway.

“Oh great,” muttered the First Ever Tree In The World. Sap had started leaking from his branches as he came back to life. “All the animals have had a wank on me and now I’m covered in fucking moss.”

“Hurray, you’re alive!” cheered Hannibal. “We all worked together to stop… climate change, I think, and everything’s OK, and that’s the moral of the story!”

Just then a meteor struck the planet, killing everything in a thousand mile radius instantly, and setting in motion such catastrophic changes to the planet’s atmosphere that advanced life became unfeasible. That is, all except for one brave giraffe who had decided to go it alone, and was meteor-proof. That giraffe’s name?