Let’s just take it as read, then, that I am the new Doctor Who. Here’s the title card, which will show on the telly while a posh bloke says “And coming up after the local news, Dr Who will kick the dicks off of some Go-Bots, or something”. 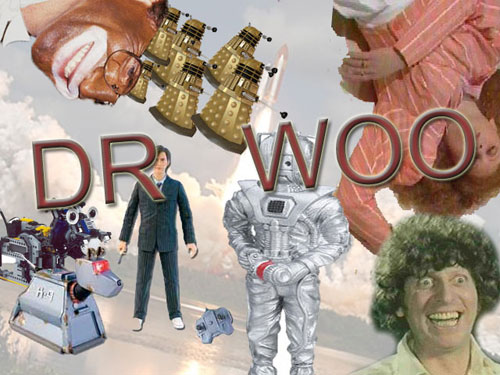 I have written a new opening sequence to more properly suit my Doctor’s “energy”. K-9 is flying around in space. There is a close-up on his ears, which spin around, and he says “DOCTOR, I HAVE DETECTED AN EPISODE IN THE SPACE-TIME CONTINUUM.” Then I jump through a paper hoop and say “Let’s get ON IT!”

I kick K-9 into the sun, and then it’s the usual opening sequence only with me waving my arms around like I’m going dead fast.

The music is Bob Marley’s Jammin’, but the last line of the chorus changed to “We hope you like Doctor Who”. My assistant, a sarcastic parrot with a monocle and the voice of Brian Sewell, squawks “Sure do!”, lands on my shoulder, and we jump into the Tardis.

(On the Dalek episode, the Daleks have a verse, too. They come in, singing “We are the Daleks, we love the disco sound” and I wag my finger at them until they say sorry)

So the action starts, and I’m on a NEVER BEFORE SEEN BEFORE new planet, where time is BACKWARDS. I shoot a monster in the face and a doctor (not me) appears and issues it a birth certificate. I actually say the word “WHURGH?” and the doctor says “I don’t know what planet you are from Mr Who but on this planet we issue birth certificates when people die and everyone smokes cigars”. He hands us both a party popper. My parrot shrugs and makes a “doi-yoi-yoing-g-g” sound that it learned off the telly. I decide to investigate.

Before long Ted Danson arrives, and tells me I have to get off his planet. I wrestle with him in a void dimension for twelve episodes, and everyone is astonished when it turns out he is full of Daleks and it was them all along, not Ted Danson. But THIS TIME, the Daleks have all got human noses because they thought perhaps it was the fact we could smell them coming that made us keep winning.

The Daleks say “I smelled YOU coming Dr Who, how do you like them apples” and I raise my eyebrows so far that they fly off, and tickle the Dalek’s noses. They all sneeze their plungers off, except for the supreme dalek, who I have to wrestle in a void dimension for a couple of episodes. Eventually I throw him into a wheelybin, rip his plunger off and stick it up my shirt like I have got a tit.

Then I regenerate SIX TIMES, which is a record for Most Regenerations In A Single Episode Of Doctor Who, and everyone is really pumped up. Then my parrot just dies, and suddenly everyone’s crying, it’s a real bittersweet thing. “Shit man, I just killed all the Daleks, why are you bumming everyone out,” I say, and time flies out of my mouth and into the parrot’s face until it is alive again. “Phew,” I laugh. “That was a close one.”

Then Kylie Minogue walks in and we make out, forgetting that in my latest incarnation I am a woman, which causes 30,001 complaints and the removal of BBC1 from the space-time airwaves.